La Parida: Where the Wild Things Were 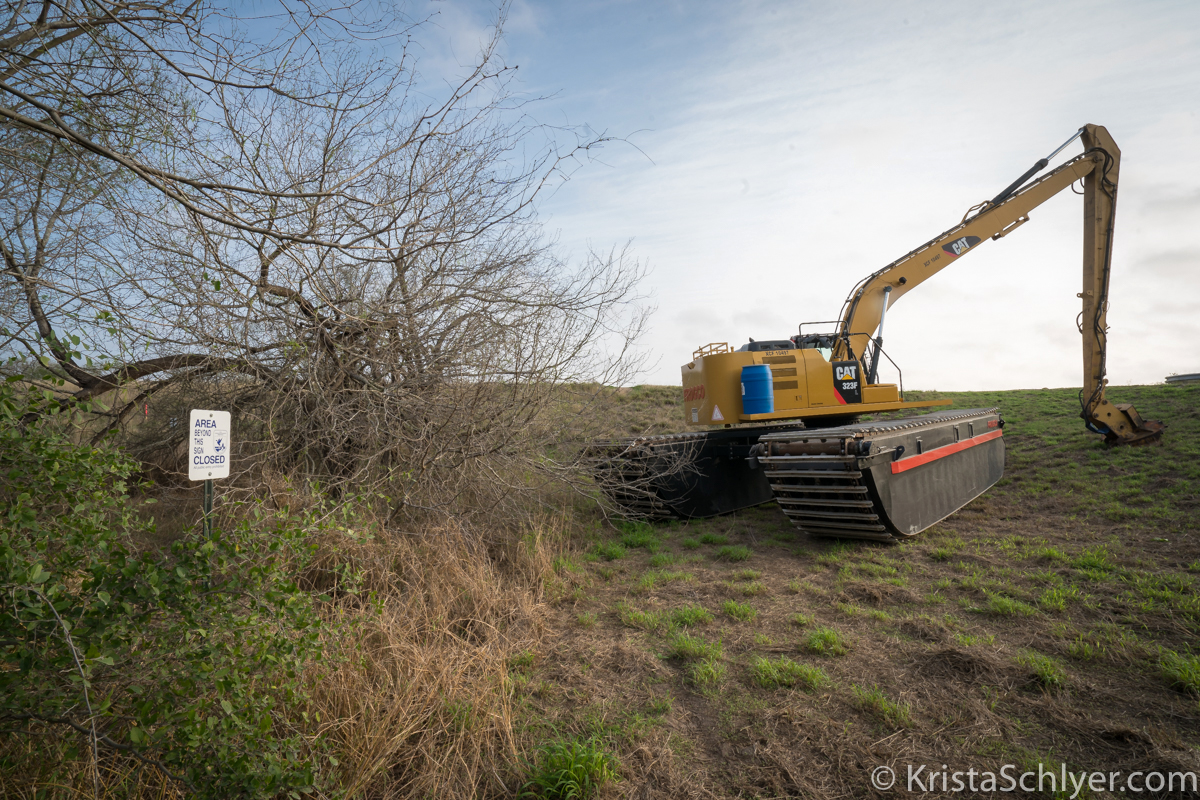 Wednesday morning at dawn a solitary pied-billed grebe paddled through a misty oxbow lake called La Parida Banco in the Lower Rio Grande Valley National Wildlife Refuge. La Parida translates from Spanish as: one who has just given birth, perhaps the most apt description I’ve ever heard for a wildlife refuge. I contemplated this meaning as the little grebe and I shared a cold February sunrise in the North American tropics of South Texas.

Though we occupied the same space, we came to La Parida on different errands: his was a search for food and safety on an island of wild sanctuary within an ocean of human development. Me, I was surveying the site of the first major border wall construction in Texas since 2009, the construction that would devastate the pied-billed’s home. 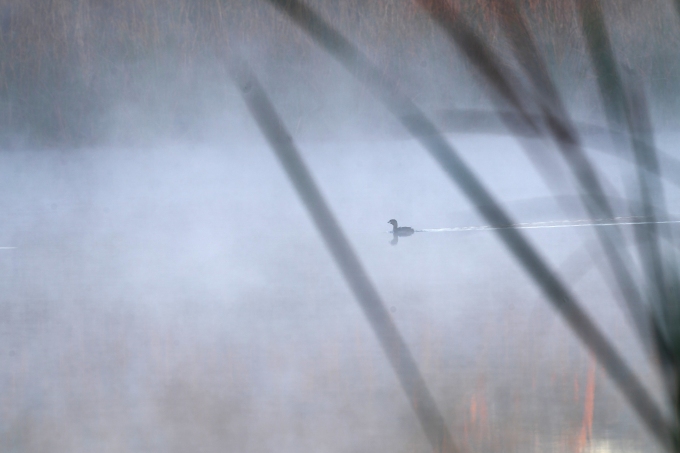 Yesterday, wall construction began. I walked the Rio Grande levee at dawn and instead of the usual hawks, herons, turkeys and orioles, I was greeted by a battalion of law enforcement. I knew by the ripping feeling in my heart that this signaled the beginning of wall construction, a feeling that was confirmed when I saw an excavator arm moving like a giant insatiable insect over the forest. My mind went to the birds that had been building their nests in the forest; the butterflies who had laid their eggs on the underside of leaves hoping to keep them safe from predators; the tortoises and snakes in the brush, the bobcats and coyotes quietly hunting shrews and cottontail.

Grief has made itself a home in the borderlands of late.

La Parida – She who has given birth. A tract of the Lower Rio Grande Valley National Wildlife Refuge.

But my thoughts were quickly interrupted by a by a Border Patrol agent, kindly telling me to leave. I backed slowly away, eyes still on the arm of the excavator moving purposefully over the forest just beyond a long line of Border Patrol and other law enforcement officials.

My walk back to the parking lot in Bentsen state park was one of my lowest moments in the past ten years. I have been documenting the US-Mexico border for more than a decade, since the Secure Fence Act of 2006 mandated the construction of more than 700 miles of border barrier through one of the most important biological regions on the continent. [See Embattled Borderlands ]

Kit foxes in borderlands of Chihuahua and New Mexico.

This land provides home to the highest diversity of birds and butterflies in the continental US; five of North America’s six cat species; resting and refueling for 700 migrating animal species; and a last hope for some 100 threatened and endangered species, including Sonoran pronghorn, desert tortoises, cactus ferruginous pygmy owls and many more whose futures are tied to this land. [see this report by the Center for Biological Diversity]

That future hangs by a fragile thread. In 2018, Congress approved $1.6 billion for wall construction on the border. Last spring, the Trump Administration began building wall in New Mexico. Construction began yesterday in La Parida. Surveyor stakes have been planted delineating the “enforcement zone” where forests will be cut. And Congress is adding another $1.3 billion in border wall funding in 2019 in order to avoid another government shutdown. Several locations in the Valley have been given a reprieve in this legislation, but not the Lower Rio Grande Valley refuge, not La Parida, she who has just given birth.

Javelina at border wall in Arizona

The ecological stakes of this political bartering have been well documented. Since the 1990s the US government has constructed about 400 miles of solid barrier, through the 2,000-mile borderlands. This wall has severed migration corridors for endangered bighorn sheep, ocelots, jaguars and wolves, caused damaging floods, degraded fragile watershed ecology, and fragmented and destroyed tens of thousands of acres of habitat essential to wild species.  The barriers and habitat loss come at the worst possible moment, as climate change is exacerbating the frequency and intensity of droughts in the Southwest–a time when wild species’ best hope of survival is the ability to migrate.

These threats would normally be prevented by bedrock environmental laws like the Endangered Species Act, Clean Water Act, and National Environmental Policy Act. But a provision in the Real ID Act of 2005 allows the Department of Homeland Security to waive all laws to expedite building of a border wall. 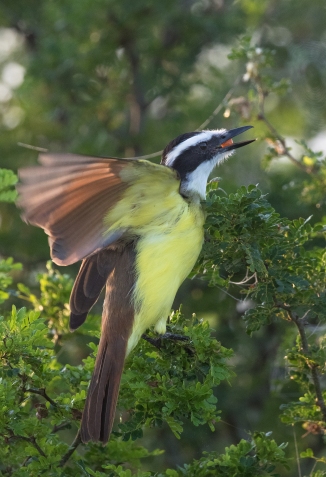 Here in the Lower Rio Grande Valley the direct damage of habitat fragmentation and destruction is compounded by a history of large-scale agriculture, energy and residential development. More than 95 percent of the native habitat in the Valley has been replaced by agricultural fields, oil wells, wind farms, roads, subdivisions, and shopping centers. Within what remains of this endangered ecosystem, one of the most unique wildlife communities on the continent fights for survival. South Texas sits within a natural borderlands at the overlap of the north and south of the natural world, where temperate bird, butterfly, mammal and reptile species coexist with their tropical cousins.

It would be hard to overestimate the natural value of the La Parida refuge. It is one piece of the larger Lower Rio Grande Valley National Wildlife Refuge, a collection of the most valuable ecological lands along the last 275 miles of the Rio Grande. The refuge began as a desperate attempt to save what was left of a vanishing ecosystem. Decades of work, thousands of volunteer and staff hours, and many millions of dollars have created what is now one of the most important wildlife corridors in the country. Refuge land and state parks, along with private preserves like the National Butterfly Center, offer one last hope for thousands of wild species. But this corridor along the Rio Grande sits directly in the path of the border wall, which will be built on the Rio Grande levee.

Few in the United States have ever heard of La Parida, but this refuge has given birth to the grebe, kiskadee, green jay, ringed kingfisher, red tailed hawk, bobcat and javalina. This land is essential. It is home. It is life. But as I look across the water to the Rio Grande levee where construction equipment moves over the land, I see death on the horizon.

Come and protest the desecration of the Rio Grande Valley-noon, Saturday, 2-16-19 at Bentsen-Rio Grande Valley State Park. If you can’t come, call your members of Congress today or write an op-ed for your local newspaper. Be a voice for the borderlands.

Krista Schlyer is a conservation writer and photographer and author of the book Continental Divide: Wildlife, People and the Border Wall.  She is currently working on a film with Jenny Nichols and Morgan Heim called Ay Mariposa, which tells the story of two fierce women and a community of butterflies on the front lines in the battle against the border wall.