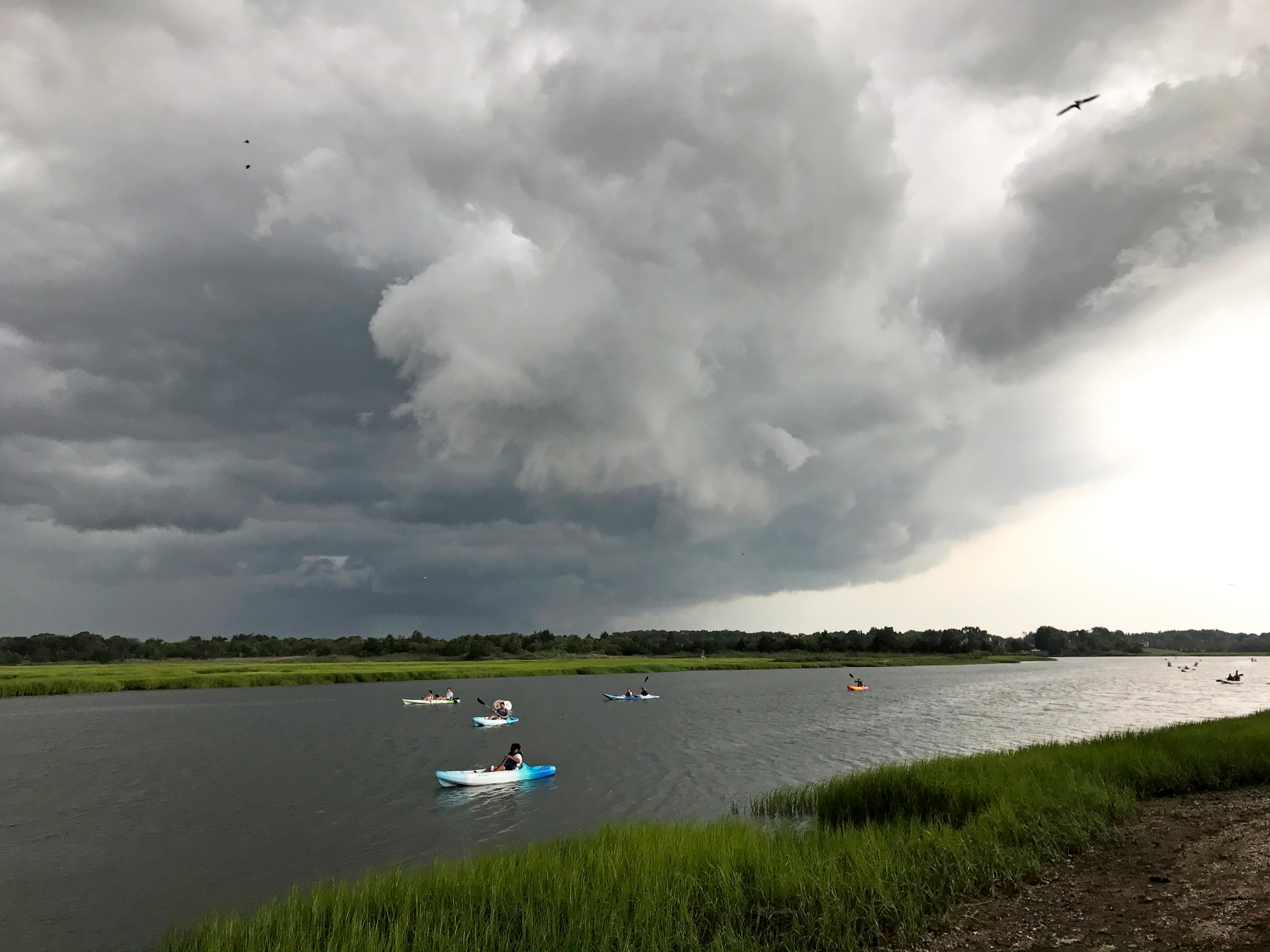 One of our first big weather events is behind us. Maggie May made it through Tropical Storm Isaias virtually unscathed.

We spent the day of the storm on high alert, as the wind forecasts were constantly changing. This uncertainty was the greater part of why we decided to go to a marina rather than ride the storm out in a hurricane hole in the Chester River. It was a good decision. I don’t think we were in the best mental state to weather near 50 knots at anchor. The past weeks since I last posted have been difficult– Coming to terms with the likely end of our long-planned circumnavigation, trying to adjust to a new outlook, and facing a near constant set of new challenges.

The cumulative effect has been a gnawing, fraying self-doubt, an inner squirrel sitting prettily on a shredded confidence nest in each of our psyches. Open water is no place for such nagging uncertainty, a fact brought home to us every few days on the Maggie May.

A few days before Isaias, we were sailing from Still Pond in the northern Chesapeake to Rock Hall, Maryland, where we planned to re-provision before heading back into the Chester River for a while. The storm predictions at that point were mild for the Chester, and there were several protected anchorages we wanted to explore.  We were sailing 15-20 knots, a good wind speed for Maggie May, but we were head to wind and the Bay was rough with unusually steep waves. We decided to forego the genoa (the large sail at the bow of the boat) and use our solent stay and a smaller sail we got for heavier weather. Bill was hanking on the sail, I was driving, and as he started to trim the sheet, CRACK!, the sheet snapped and started whipping around the deck, lashing hard against the dodger (the covering over the cockpit), out into the angry air beyond the boat, and back SLAM! onto the dodger, over and over…and over. The boat was being jerked by waves and tossed and pulled by wind.

Bill said “We need to take the sail back down.” We didn’t have an extra sheet on hand to replace the broken one. Good to know. And the flailing spasms of the sail were dangerous. “Lower the halyard to me when I get to the bow.”

Bill wrestled with the wild sail as the boat tossed about, I tried to keep us on the smoothest course, then put the helm on auto and went forward to help him stuff the sail down below. Once it was stowed, we rolled out the genoa and continued sailing through the rough bay waters.

This is not an unusual intense moment on a sailboat. A year ago it could have happened and not rattled me much. I might have even found it exhilarating. But that day it stuck with me, along with the nausea and fatigue I always get from rough days on the water. Bill took the helm most of the day, and I tried to steady my wavering heart and belly. We arrived in Swan Creek near Rock Hall, anchored, and I retreated into my thoughts.

So much has happened with Maggie May over the past 7 years, so much in the past year, in the few months since we moved aboard. I feel at this point as if I am always teetering off balance, waiting for the next thing to happen that will push me down again. Bill and I each have a constant inner monologue going, whatever we are doing, about what could possibly go wrong next. Though as the squirrel demonstrated, some challenges are just beyond the realm of imagination.

I consider myself a pretty tough person, but I am confronted by fear in a way I never have been before, on a sailboat or otherwise. I’ve spent a lot of time recently telling myself, ‘You are not equal to this task. You’re not strong enough, mentally or physically. You’re too old. I’ll luck has beaten you.” But my heart holds fast to everything I had hoped for in this journey, and I think about all that has come before, so many challenges met and made into memory all the way back to ancestral memory from the early 1900s in rural Kansas.

First the recent past.

The morning after the squirrel chewed up our sail Bill woke with a fever and aches and pains. His doctor set him up with a test for Covid 19. My mind reeled over the absolute worst that could happen. He got the test the following morning. As we waited for the test results a new friend at the marina came over to say goodbye, expecting we were heading out, and I told him about Bill’s illness. He already knew about the squirrel, and barnacles, osmotic blisters, faulty bottom job and numerous other challenges we had faced over the past years.

“Did you guys do a renaming ceremony for the boat?” he asked with some concern, the idea of very bad luck being written upon our lives. I told him we had done a nice blessing of the boat when we launched. His eyebrows knitted. Then he told me what he did when he renamed his boat, based on a lot of research into how you rename a boat. “I have a friend who renamed his boat without taking the proper steps and he has had all sorts of ill luck.” 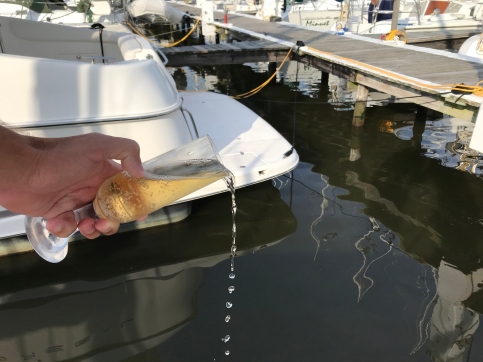 Burning all evidence of Kahouteck

I chuckled a bit, assuming he was at least partly joking, and thinking ‘Sailors, superstitious bunch.’ But after he left, I immediately went to look it up on the internet. I found one million entries about how exactly you rename a boat without incurring Poseidon’s wrath.

I started following the procedure to the letter. Renaming a boat requires taking all reference to the former boat name off the boat. I scoured every crevice and cranny aboard. Went through every binder and book. There were several Vilkas items, the wolf blanket and a key chain, and I even found one piece of paper that had the name of the boat two owners ago – Kahouteck (which sounds like an Aztec curse, but is actually the name of an astronomical phenomenon ). This occupied me for hours, but Bill was in bed with a fever waiting for test results, so I had some time on my hands.

The renaming ceremony requires writing the old name of the boat on a piece of metal with water soluble ink, which you will drop in the water. I didn’t have a metal name plate, so I wrote Vilkas on a potato chip in pencil, and Kahouteck on a Ritz cracker. I worried about not following proper procedure, but I figured if it was an item of great value it would work just as well, and dissolve all the faster. Poseidon would be pleased, and Vilkas and Kahouteck would give some “nourishment” to the fish.

You also have to take off any reference to the new name, prior to the ceremony. I gathered all this up, including Original Maggie May’s ashes, which sit in a central spot on the boat. We put all of this Maggie May gear on the dock. I covered the stern with a scarf, because Maggie May has her name there. Once all this was done, I waited til Bill was feeling a bit better and then roused him from his sick bed. We carried out the ritual, using the prescribed plea to Poseidon to vanquish the names of Vilkas and Kahouteck from his records, and to add Maggie May and watch over her.

I also said the proper prayer to the four winds and added in a plea to every sea god I could find in my book of world mythology.

We made ourselves right with the gods. Bill went back to bed and I figured whatever happens next is well beyond our control.

The next morning Bill got a call that his test was negative for Covid. He was in bed for another day, but felt good enough to head out the following day. So it worked! Well, not if the past few weeks are any guide, during which we have run aground twice (once was our fault), gotten stung by jellyfish, had a staff infection, run over a crab trap which got stuck in our prop and damaged our rudder and cutlass bearing, and snapped a sheet. These things are all par for the course on a sailing adventure, but happening on the heels of everything else, they knocked us down to the ground every time. The crab trap in the prop happened near Cape May, where we were planning to jump off north toward Maine. In Cape May, getting the prop untangled and assessed, we decided that we needed to instead head back to the Chesapeake Bay, stay good and safe during the storm season, work on our sailing skills, (an unlucky sailor has to be extra prepared) and regain our trust in ourselves and the future of this journey.

A tropical storm followed us here, and regaining my confidence has been a daily affair. Recently, my mind has turned often to the boat’s namesake, once removed. Not Original Maggie May, but the woman Maggie was named after, my granny. Her name was Pauline Margaret, and she went by Pauline all her life, but told me one day a few years before she died that she always wanted to be called Maggie. My granny was a tough woman. She grew up on a farm in Kansas and lived through two world wars, Spanish Flu, the Great Depression and Dust Bowl. She kept that farm girl fortitude all her life. She was also terrified of water and storms and mayonnaise and untidiness. But she kept her chin up, always. Now, when my heart begins to cower, I think of her, ball up my fist like she taught me, and carry on.

I thank all of you for your care, kindness and support. We are ok. We’ve spent some hard days and done some reckoning and are at peace with looking at this journey in another way, waking each day and seeing what it brings, doing our best to live life ever present and appreciative.

Upon much reflection I can see very clearly that the leap of faith we took 15 years ago and every day since, the intension that brought us to this place was not in vain. For the idea was never truly to make miles across the ocean, but to learn how to live again. To set ourselves in the crucible of nature and see what its foundational motion made of us. To let go of whatever the waves erode, whatever gravity wears down, whatever the salted water scrubs away. To hold on to what the winds bear up, and whatever remains at the end of this adventure. I still believe we will be the better for it.

And I wish each of you courage in the challenges that come your way, and a stout heart in these uncertain times.