The Voyage Has Begun

Last Tuesday, June 8, 2020 we cast off lines at Town Point Marina in Deale, Maryland, and headed out into the Chesapeake Bay for what we hope is a 3-year voyage around the world. Dear friends began arriving around 8 am and we said a few words, read a poem of blessing, and sprinkled some champaign on Maggie May’s bow. The surge of emotion that accompanied all of this, caught me off guard. There are just some times in life when you have worked so hard on something, given everything you possibly have to make a dream become a reality (or stave off some catastrophe), when past, present and future well up together for a moment. All this to say, I barely got my words out, they were choked and garbled with raw relief, joy, apprehension and possibility. I think my friends understood. Here is the poem in full:

that is entering even now

the lip of our understanding

beyond the face of fear

the wind then turn from it

certain that it will

love your back may you

open your eyes to water

and may you in your innocence

sail through this to that

Several friends sent this poem to me over the past few months, knowing our departure was imminent. It is so perfect in so many ways. 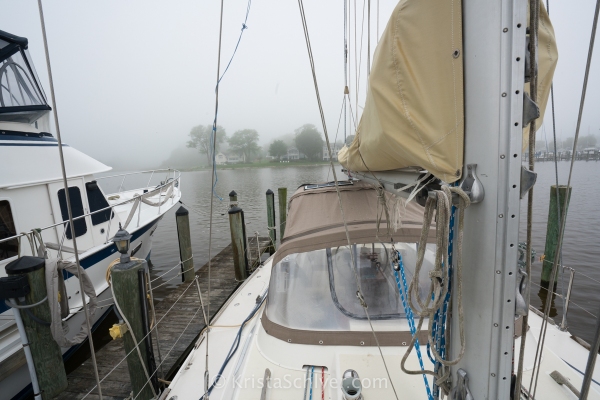 I looked back for a long time at my friends Margaret, Valerie, Dave and Anne waving goodbye from the dock where we spent so much time preparing Maggie May, and at our friends Tom and Emily who had brought their canoe to see us beyond the jetty. I looked back as long as I could, to remember that moment forever, to feel that love and the waves of gratitude for the life we have lived up to now. When I turned finally towards the bay, I turned to the great unknown I have longed for for all these many years, through so much grief, anxiety and inner turmoil. I turned toward fear and wonder and adventure and a life scoured to its barest elements. 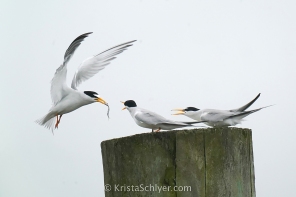 The first leg of this voyage will be northerly so we headed the boat up the Bay towards the Chesapeake Bay Bridge. The wind was light, 5-7 knots, but we managed to sail most of the way up to the bridge. I’d never passed under this immense span before. I’m not one to find awe in infrastructure, given all the damage it does ecologically, but passing under the Bay Bridge was something to remember, in part because of its mammoth imposition on the entire viewscape, and also because it was further than I had ever taken Maggie May to the north. 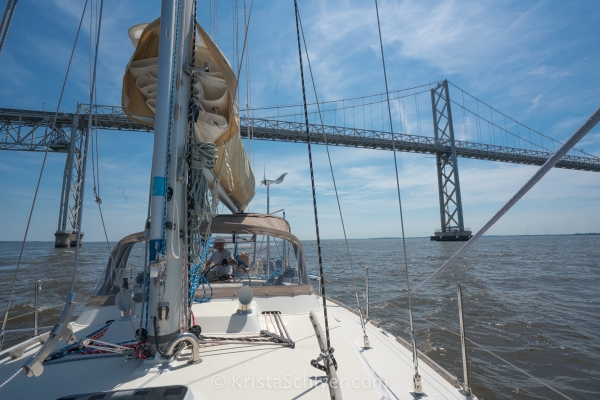 Beyond the bridge we made straight for the Chester River, where we planned to anchor for the night. This river, the longest navigable waterway on the eastern side of the Chesapeake Bay, is home to the Eastern Neck National Wildlife Refuge, where we hoped to spend most of our time for the next days. But the wind was not favorable for an anchorage near the refuge, and the wind decides and we abide, so we headed deeper into the river to a little cove near the Comegys Bight. It was a good thing we did, because the weather grew nasty over the next few days. 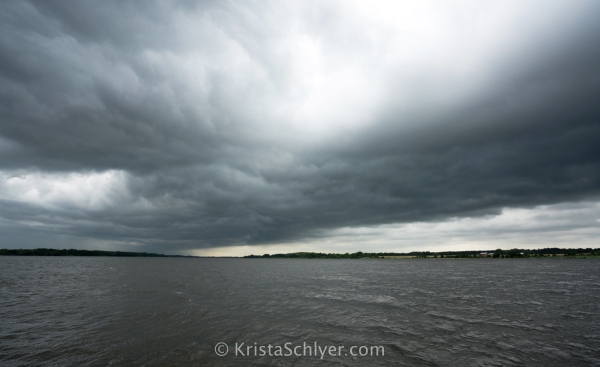 Before the storm we had a few trips out in the dinghy to explore the nearby wetlands, beach and forest, finding many surprises, including the largest concentration of brown water snakes I have ever seen. Bill, terrified of snakes, vowed he would never set foot in this water after we made this discovery. We poled the dinghy into a shallow stream through thick wetlands and on the way out I noticed a little snake face staring out at us from the reeds. And then another and another and then, when we reached the mouth of the stream, a snake swam in right front of the dinghy with a fat, pale yellow fish with bewildered eyes, clamped in the snakes satisfied but anxious maw. The fish was easily three times the size of the snake’s head. I didn’t know they hunted for fish, and it was incredible to see this in action.

Bill did not experience the same delight over this discovery as I did.

As we got back to the Maggie May Bill was trying to secure the dinghy (Minnie May) and he wrenched his back painfully. His back had been bothering him for weeks, but I think the terror over the snakes and the jolting movement of the boat pushed him over an edge. And he probably had not been allowing his body to rest over the past weeks leading up to launch. Now his back has said, you will stay put for a while. So we have stayed anchored in this same Chester River spot for many days longer than we would have. Storms rolled over us and rolled on. Weekend boaters tubed in circles around us, their wakes tossing Maggie May about. Sun set and rose, casting its light and darkness upon the world.

I am content, wherever we are. I’ve spent the past 5 days learning how to live this life. I have learned many things, some important and some not so much. Here are 5:

28 Comments on “The Voyage Has Begun”