This year marks the 30th anniversary of the fall of the Berlin Wall. I can still hear Americans cheering when Ronald Regan demanded “Mr. Gorbachev, tear down this wall!”

Today is also the 10th anniversary of a much lesser known historical event — the Borderlands RAVE. It was an expedition I organized with the International League of Conservation Photographers, focused on raising awareness of the beauty and biodiversity, value and vulnerability of the US-Mexico borderlands after the passage of the Secure Fence Act of 2006.

There were 15 of us on that trip, some of the most committed photographers, scientists and filmmakers I’ve worked with. We traveled the border from San Diego to Brownsville from January 19 to February 19 of 2009. We documented some of the most exquisite beauty and rarest habitat in North America; stayed with border residents who opened their homes to us and shared their stories of love for their homeland on the border. We were detained by Border Patrol and by flat tires and desert sand. We slept under the endless desert sky. 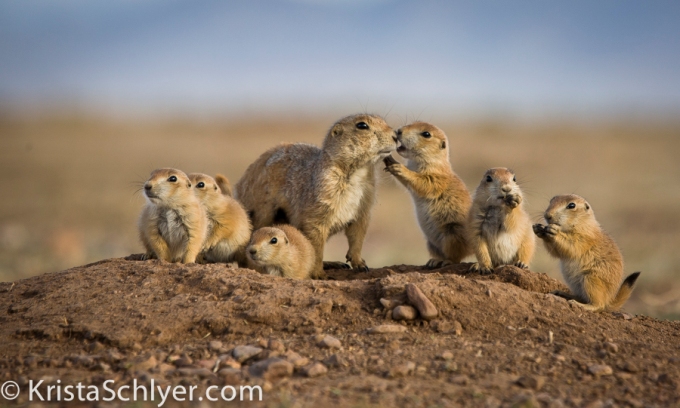 Prairie dogs in the US-Mexico borderlands.

The last days of the trip were spent in the Lower Rio Grande Valley, where less than 5 percent of native habitat remains and border wall construction had already begun to fell forests and scrape the land bare, leaving no secret passageways or gentle quarter for endangered ocelots and jaguarundis; setting the stage for massive flooding that would drown imperiled Texas tortoises in 2010; and diminishing an already nearly vanished refuge for birds and butterflies.

When the trip ended we had gathered thousands of photographs, undeniable evidence of the importance of the borderlands and the threat that a wall posed to them. I believed then that if we just showed Congress our evidence, that this kind of destruction would end. In March of 2009, I created an exhibit of our team images and worked with Defenders of Wildlife, the Sierra Club, Center for Biological Diversity, Mennonite Central Committee and friends and family to install the exhibit in the House of Representatives. We had a reception and briefing, where many members of Congress came to speak of their opposition to wall. We did the same thing in the Senate in November 2009, on the 20th anniversary of the fall of the Berlin Wall. And senators came to speak about their opposition to the wall. We had a newly-elected president who, when he was campaigning, had said:

But President Barack Obama had voted for the Secure Fence Act, and he would continue to build the border wall that George W. Bush had started.

Flash-forward 10 years: I left my home in Washington DC this morning and got on a flight to South Texas where border wall construction in the Rio Grande Valley is starting up again. Donald Trump has become the fourth successive president, starting with Bill Clinton in the 1990s, to expand the US-Mexico border wall. Trump will, like the others, start on National Wildlife Refuge land, because it is easier to destroy the homes and futures of wildlife than to take land from Texans. Trump will also take private land, but he will start with the low-hanging fruit, public land, where he has already waived the Endangered Species Act, Clean Air Act, National Environmental Policy Act and every other law that would impede construction. Congress gave the executive branch that power under the Real ID Act of 2005.

Tomorrow I will witness and document the destruction of forests where birds have begun to construct their nests and butterflies have laid their eggs; they will be torn down by machines funded by American taxpayers.

My first instinct is to end with something snide, like: Happy Anniversary.

But that would suggest it’s possible to simply shrug off this moment, and accept walls as an inevitable feature of the modern world, along with mass extinction of Earth’s biodiversity, climate chaos and nationalism. It isn’t and they aren’t.  So instead I’ll end by asking every person who reads this to make a phone call to their members of Congress, because one thing I’ve learned is that politicians don’t do things because they are right or wrong, they do them because their constituents demand it.

For more information about the history of the US-Mexico borderlands, visit: Embattled Borderlands. Or get my book Continental Divide: Wildlife, People and the Border Wall. And look for Ay Mariposa, a new film coming out this spring.